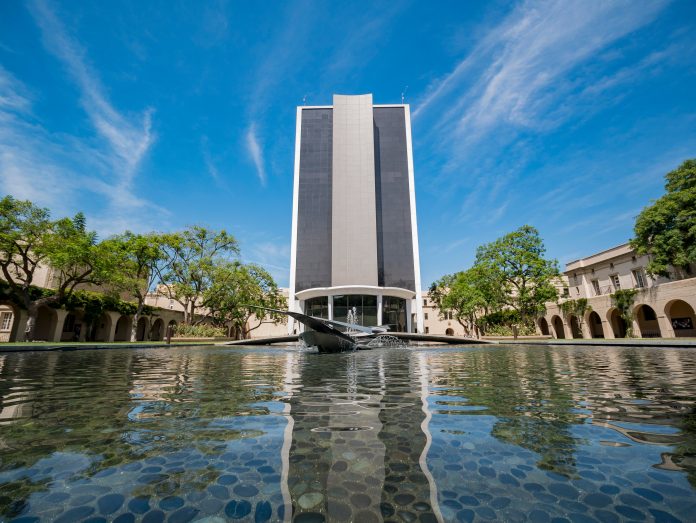 As one of the world’s top science and engineering institutions, the California Institute of Technology has a rich history of architectural design. Once a month, anyone can tour the campus and learn about the origins of its academic buildings.

“The tour offers local residents and visitors an opportunity to experience the history and architecture of Caltech’s campus that has been designed to attract and inspire some of the world’s brightest minds, and provides innovative tools to address fundamental scientific questions and pressing societal challenges,” says Judi Cowell, Caltech history and architectural tour service docent. Founded in 1891 as Throop University (named after Amos Gager Throop), the original building was constructed in the Wooster Block at the southeast corner of Fair Oaks Avenue and Green Street, where it still stands today. A plan was set up in 1917 for a 22-acre campus to reflect the philosophy of astronomer George Ellery Hale, the local climate, and Spanish mission architecture. An expansion in the 1960s included Beckman Auditorium (designed by architect Edward Durrell Stone).

The tour of Caltech’s 124-acre primary campus showcases several distinctive sculptures and buildings. “Some sculptures depict the science within the building, such as the 1924 Douglas Cruisers that circumnavigated the world,” adds Cowell.

Among the historical buildings, the tour highlights: • The Athenaeum opened in 1930 as a private hotel, restaurant and home to such famous residents as Albert Einstein, a visiting professor for three winter terms (1931-1933). The building was designed by Gordon Kaufman in the style of Mediterranean Revival. It now functions as a faculty and private social club.
• The Guggenheim Aeronautical Laboratory was created in 1926 as a research institute in aeronautics and led to the establishment of the Jet Propulsion Laboratory (JPL) in 1943.
• The Beckman Institute was founded in 1986 by Arnold Orville Beckman and his wife Mabel for the study of chemical and biological sciences. It was designed by Albert C. Martin in a Spanish style with four levels of laboratory space and libraries, a pool and a central courtyard. The tour has attracted over 18,000 visitors in the past 31 years and offers interesting anecdotes during the walk. “In addition to Einstein’s visit, the tour also shares the rich history of Caltech pranks and humor, including a scavenger hunt to find architectural features that have been creatively integrated into buildings across the campus,” says Cowell.

At press time, Caltech is closed due to the coronavirus crisis. The tour usually takes place on the fourth Thursday of every month except from June through August, and in December. Special group tours are available upon request.

Some of Our Favorite Places to Check Out in South Pasadena