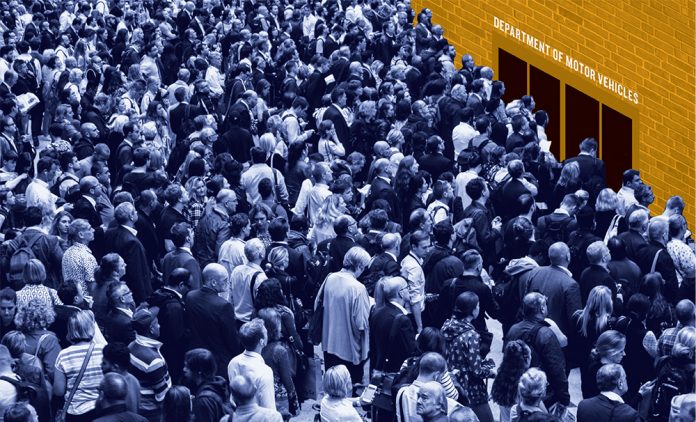 The Pasadena DMV is a miracle. Hear me out. Have you stepped inside the DMV lately? I’m not talking about a “renew by mail” situation. I want you to walk inside, stand in one wrong line, then in that other suspicious line, be required to pound your fingers on the barely-functioning touchscreen to complete a test or application, wait until your number, H2437, is called, then pose for a mugshot, cut back into the previous line, write a check because they don’t accept credit cards, and make it out alive about three hours later. That’s the 360-degree DMV experience, an administrative thrill ride.

The volume of humans expecting service, the number of different languages being spoken in front of and behind the counter, the incredibly bad driving in the parking lot—the decks are stacked against the employees and the rest of us. Who can process a driver’s license renewal with all that chaos going on? And yet, it happens. Every day, the good people of Pasadena turn over their trust, hope and vital documents to total strangers and two weeks later, a government-approved ID card arrives in the mail. See what I mean? Miracle.

I spent several years of my life at the DMV last decade. My two sons approached learning to drive with the overconfidence that’s a hallmark of their generation. Pro tip, Zoomers: you have to open the California Driver Handbook before you can pass the written test and watching Formula 1 racing on TV is not the same as driving a car. Both sons needed multiple appointments to pass both the written test and the driving test. I made about a dozen visits to the DMV in a four-year period. Is it weird that I was on a first-name basis with the security guard? I logged so many hours in those hard plastic chairs that I almost figured out the algorithm of the indecipherable numbering system for appointments. Wait, the next number called after H2437 is G1778? When my younger son finally secured his ticket to ride, I was almost sad to abandon the half-hour workplace comedy I was developing in my head called The DMV. Don’t worry, Security Guard Jejomar, you were the hero of the show!

My last trip to the DMV was to secure the coveted California Real ID. It’s some sort of magic card that gets me through TSA, onto planes, and presumably into the best clubs once I get to my final destination. How glorious! But I’d been warned that to secure a Real ID, it took months to get an appointment, required documentation that went beyond the usual utility bill, but featured a really cool bear on the front that would signify I was finally a Californian after 30-plus years in the state. As for the above warnings, they were true, also true and totally true, dude.

What I didn’t expect was the bonding experience with my fellow Real ID’ers. We were easy to spot because we all had banker’s boxes filled with old property tax bills, faded 1099s, W-2s featuring our entire social security numbers, and some report cards from 1987. We communed with the good people who work at the DMV because they had to patiently go through all our paperwork, providing staple removers when necessary. There was a sense that those of us seeking Real IDs were pioneers of a sort and the DMVers were our guides. Would I call it a celebration? Of course not.  But I’ve never seen so many strangers smile at each other in a government office.

Big shout out to Alan, my nominee for DMV Employee of the Month, who snapped one of the best photos ever taken of me. And the official Real ID itself? It positively shimmers. It has not one, but two photographs of me on the front. And a guy panning for gold! Plus, sailboats! And that golden bear with the white star on his hindquarters that’s going to get me anywhere I want to go. All I know is that I walked into the Pasadena DMV seeking an identity and two weeks later, one arrived in the mail. Miracle.

Novelist and Podcaster Lian Dolan Analyzes Her “Sphere of Influence”